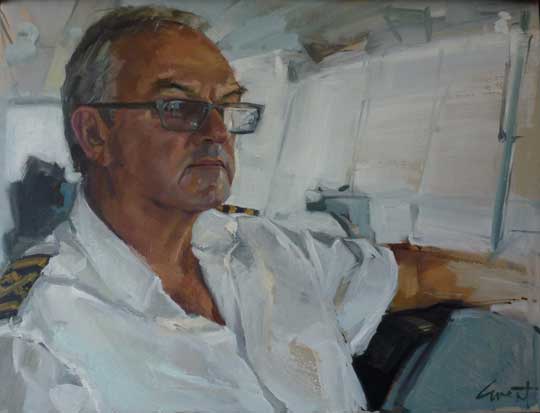 Captain. Retiring. Could continue for longer but getting out of the industry. Seen alot of changes. He will miss allot of things about being at sea, but it has all changed so much he is glad in many ways to be getting home. He doesn’t know that much about gardening and his interests are different in some respects to his wife’s. She has her girlfriends and they like to go on outings to open houses and things like that. He is not so interested, so he recently bought himself a ute. He has a yacht, so he’ll drive down there and spend a bit more time on that. Hard to know what life will bring next.

These days everyone on board are seen more as equal, everyone eats together. A lot of the formality has gone and this is a good thing, however some things have been lost. The fraternity. The respect. You have to earn your stripes and it takes hard work and experience to come up through the ranks.

The Australian shipping industry is getting smaller and smaller and you see a lot more seafarers on other ships who are in a difficult situation. English is the international language of the sea and often other ships can’t understand  what is being said over the radio. Recently Captain Spicer  had to get involved in a serious rescue with a sinking vessel because ships that were closer were unable to understand the situation.

Many retiring Captains and seafarers go through a range of emotions and things like depression after they leave the sea and find themselves more invisible in everyday life.